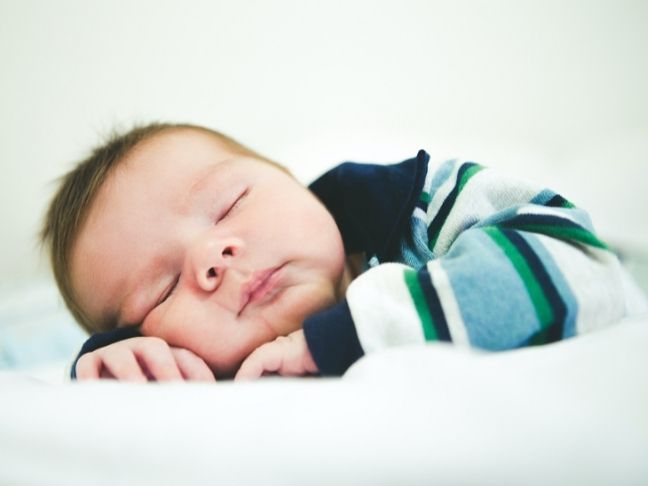 Photo by Jonathan Borba on Unsplash

Watching a baby sleep is emotionally arousing. All moms like to keep these memories forever. But, do you wonder what happens when babies sleep? There are several explanations about what dreams could mean. But these explanations are often restricted to adult dreams.

Do babies dream? If yes, what kind of dreams? And, do they have meaning?

It is not easy to explain since babies, who have not yet developed language, cannot describe what they experienced during their sleep. Are you a curious mom? Scientists can help you understand babies’ dreams and what they could mean. Read on and learn what happens when babies sleep and the possible meanings of their dreams.

What happens when babies sleep?

We often say “sleeping like a baby” to describe deep sleep. The phrase has some scientific truth. Deep sleep happens during the Rapid Eye Movement (REM) phase. The American Academy of Pediatrics reports that babies spend up to half of their sleep time in REM. Grownups spend only about a quarter of their slumber in this phase.

Although dreams can occur at any stage of sleep, they are most likely to happen when one is in the REM phase. Since babies experience REM sleep, do they dream? If they do, what do they dream about? Do their dreams have meaning?

Babies’ dreams – what science has to say

In the book, Children’s Dreaming and the Development of Consciousness (Harvard University Press, 2002), renowned sleep scientist David Foulkes asserts that babies do not dream. Not until they can process information and store memories. According to Foulkes, children don’t start dreaming until about 7 to 9 years. The smiles, twitching, and sometimes crying are just part of brain development. Foulkes says that a baby could be learning a language or other stimuli. They are forming new neurotic pathways during their slumber.

Scientists with a similar opinion argue that babies, who are yet to develop the ability to imagine and other forms of abstract thinking, cannot dream.

But there is another band of scientists. They argue that all the smiles, twitching, and brain activity that happens during their REM slumber must have some elements of dreams. In an interview with the New York Times, Dr. Charles P. Pollak affirms that babies can dream and that they do so during the rapid eye movements phase of their slumber.

Many mothers, neuroscientists, and pediatric psychologists agree that babies are not dreamless. They have dreams with meanings. It’s just that they haven’t developed language to let us know the exact nature of their sleep experiences. But we can peek into what they are dreaming about and what these dreams could mean by simply observing their behavior.

Babies’ dreams and their meanings

Twitching and other body movements in dreams

Babies’ dreams could mimic what they experience when they are awake. It could be responding to sensations such as suckling on a breast, temperature variations, or images of close family members. Once a baby learns a skill or familiarizes an image, twitching or sleep movements associated with the pattern reduce. For example, researchers from the University of Iowa found that once a baby learns to hold their head, REM movements related to neck twitching significantly reduce. Their brains process the information and form neurotic pathways to make them familiar.

Crying in their dreams

When a baby cries in their sleep, there could be a lot going on. Proponents of Foulkes’ explanation explain that the baby is processing something that took place when they were awake, like a startling sound. This is the same for adults, where in general, a crying dream usually correlates to an emotional disturbance in your waking life.

Plus, there is the Moro explanation. Moro is a reflex associated with infants in which they flail their limbs involuntarily. Moro can happen when a baby is asleep, thus causing them to cry in their slumber.

On the other hand, people who believe that baby dreams are not just about their awake experiences suggest that they could be dreaming and learning in their slumber. According to Dr. Revonsuo, a neuroscientist, not all dreams are random. Babies (like other animals) could experience dreams as part of the evolution process. The baby could be dreaming about a possible threat (that affected her ancestors) and practicing possible avoidance or escape mechanisms. It is part of natural selection.

Either way, it is crucial to know how to respond to a baby’s actions in the REM sleep phase. For example, when they cry, sing or give them something to comfort them. It could soothe them back to sleep.

We may not know what happens when babies sleep. You might agree with Foulkes’ argument or believe that babies’ dreams have a lot more content than we can decipher. Either way, there is concurrence that babies’ dreams play a significant role in their development. It is crucial to allow them as much sleep time as possible and learn how to respond to their dreams.