Top 5 places to visit in Japan. 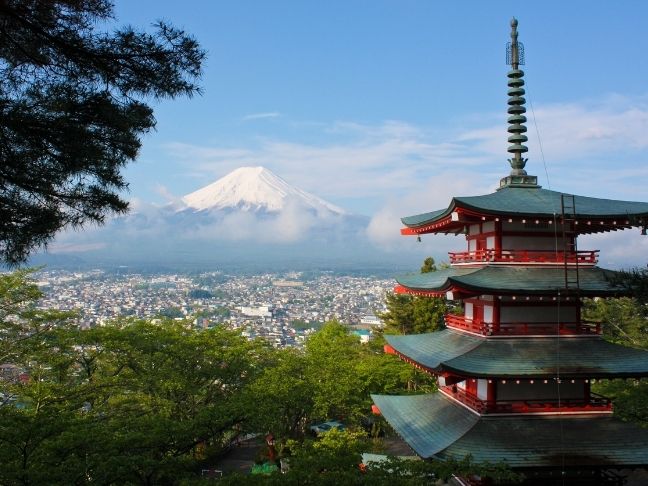 Photo by David Edelstein on Unsplash

Japan has a mix of modern and ancient cultures, offering something for everyone. It is a spot where you can find incredible food, ancient history, awe-inspiring scenery, and the trendiest hangout places. If it is your first time to Japan, it can be an understandably overwhelming task trying to decide where to start. I have made it easier for you by narrowing down the top five best places in Japan.

Mount Fuji has always been the icon of Japan. Standing at 12,388 ft, it is the tallest active volcano in Japan, with its last eruption in the year 1707. It is possible to climb Mt Fuji in a day without any hiking experience. But usually, it is recommended to reserve 2 days for the hike. Most hikers will hike up at night and arrive at the peak at dawn. More than 200 thousand people climb to the summit yearly from July to August.  Due to the damming effects of the lava flow, it naturally created Fuji Five Lakes, namely Lake Yamanaka, Lake Kawaguchi, Lake Sai, Lake Shoji, and Lake Motosu, which is part of the cultural World Heritage Site.

Cherry blossoms usually bloom later in spring around mid-April, and the best place to photograph it together with Mount Fuji is at Arakurayama Sengen Park. At the same time, you can also catch the Fuji Shibazakura Festival, which displays breathtaking carpets of pink moss against the backdrop of Mount Fuji. The best time of the year to view Mount Fuji is during winter between December and January where the peak is coated with white snow. You can view Mount Fuji from many alternatives, from your plane’s window seat on clear days or from observation platforms in Tokyo city such as Tokyo Skytree.

Kyoto was Japan’s old capital from 794 until 1868. Kyoto is a cultural and historical treasure of the country. Despite being ravaged by wars, earthquakes, and fires, many temples and priceless structures still survive in the city today. They are all collectively recognized by UNESCO as a World Heritage Site. It is interesting to walk through the past, on narrow cobbled stone streets lined with old wooden houses. One of the most famous structures is Kiyomizu-Dera, a Buddhist temple, which was built without any nails, featuring its large wooden terrace with tall pillars. During the Edo period, it was believed that one’s wish would be granted if you could survive a 13-meter jump from the stage. 85% of people who jumped survived. The practice is now prohibited.

If you are lucky, you may bump into a Geisha in the district of Gion. Geishas are elite Japanese entertainers, which adds a special touch to the proceedings. Another local experience to try out is staying in a Ryokan. Ryokans are Japanese traditional inns, which feature tatami matted rooms and sliding doors. Don on a Yukata (Kimono like garment) and try out the communal baths which usually use water from a nearby Onsen. Have a relaxing and long soak in your birthday suit. Another hidden gem in the outskirts of Kyoto is the Arashiyama Bamboo Grove, which offers beautiful walks across a forest of bamboos. It is a very peaceful and soothing experience, listening to the sounds created by bamboos when the wind picks up.

Tokyo city is Japan’s capital offering modern technology and nightlife. Try scrambling with people at one of the world’s busiest pedestrian crossings at Shibuya Crossing. Watch the mayhem as people pour across the street from every direction, into a frantic mess. Check out Tokyo’s extreme pop culture at Harajuku, where there are gatherings on Sundays to express more theatrical dressing styles. For the sweet tooths, Harujuku offers street food of all sorts such as crepes filled with assorted flavors, oversized cotton candy, and the “Tornado potato” (curly fry on a stick).

Tokyo is a great destination for solo travelers. Stay at Tokyo’s famous capsule hotels, which are pod-like compartments stacked together with a closed up curtain. It is an affordable accommodation that provides basic amenities like an air conditioner, television, bathing facilities, and a locker. Try out Ichiran Ramen, one of the most popular solo ramen restaurants. Here, you are required to purchase a ticket via a vending machine and then ushered into an eating cubicle. It was initially intended to help customers focus and appreciate its ramen flavor without being distracted.

For sushi lovers, check out Toyosu Market where you can taste the freshest sushi meals from 6 am onwards. This is the world’s largest wholesale market where visitors can observe the auction market that is held around 5:30 am to 6:30 am from the upper floor viewing deck. Tunas are brought together from all over the world, featuring an average of 200 fresh tunas and 1000 frozen tunas on the auction block.

Hokkaido is a great place to explore its untouched wilderness. Hokkaido usually experiences heavy snowfall in winter, where some regions can receive up to 18 meters of snow. This resulted in lots of untouched powder snow which is praised as the best quality snow. Its world-class slopes make it a sanctuary for skiing and snowboarding activities. The biggest ski resort area is Niseko, featuring family-friendly activities and also its hot spring Onsen. Every year, in winter around February, Hokkaido celebrates its annual seven day Sapporo Snow Festival. It features 250 spectacular ice sculptures, depicting buildings, temples, and some of which are also used as a stage to host concerts and events.

Outside of winter, Furano’s lavender meadows are in full bloom from July till August. Farm Tomita is the best spot to feast on the breathtaking waves of lavender, which stretches over 20 hectares of land. Another site not to be missed is the Blue Pond in Biei. It displays brilliant blue color changes in different weather conditions, owing to the natural minerals dissolved in its waters. Surrounded by the Pacific Ocean, Hokkaido is a haven for seafood lovers. There are abundant high-quality crabs to try out such as the Horsehair Crab, King Crab, Snow Crab, or the Hanasaki Crab. There are restaurants serving all-you-can-eat crabs, where you can eat crabs to your heart’s content. Once they are boiled and frozen, you can then enjoy their tender rich taste.

Nikko used to be the sacred land for mountain worship. It is now known for its nature and its historical shrines, namely Nikko Tosho-gu Shrine, a UNESCO world heritage site. This is a lavishly decorated shrine with elaborate wood carvings, set in a beautiful forest. It is the final resting place of the Tokugawa Shogunate who ruled Japan for 250 years until 1868. The Nikko Toshogu Museum stores an impressive collection of the former shogun’s personal effects from swords to armor.

Nikko also houses one of the three most beautiful traditional bridges in Japan. The 28-meter red-lacquered Shinkyo bridge runs along the Daiya-gawa river. It was said that in the year 766, a high priest could not pass the fast-flowing river. So he prayed. 2 snakes appeared and transformed themselves into a rainbow-like bridge, allowing a safe passage to the mountains of Nikko.

The 100-meter tall Kegon Falls is one of the most famous waterfalls in Japan. You can get more impressive views of the basin of the falls by taking an elevator to the observation deck. In winter, the waterfall turns solid as it freezes almost completely, a magnificent sight you will not forget. Then go on a boat to admire the beautiful forests around Lake Chuzenji. This scenic lake is part of Nikko National Park, formed 20 thousand years ago when Mount Nantai erupted and blocked the river.

What is your favorite destination in Japan? I would love to hear from you if you have experiences to share.

Jules Tan is the founder of Outdoormagnet. She works as an IT manager in the manufacturing industry. During her free time, her husband and she writes articles relating to our hobbies on our site. Outdoormagnet is all about outdoors and travel adventures. They are located in one of the beautiful islands of Malaysia, Penang.