Is love enough? Should grandparents ask for childcare pay? 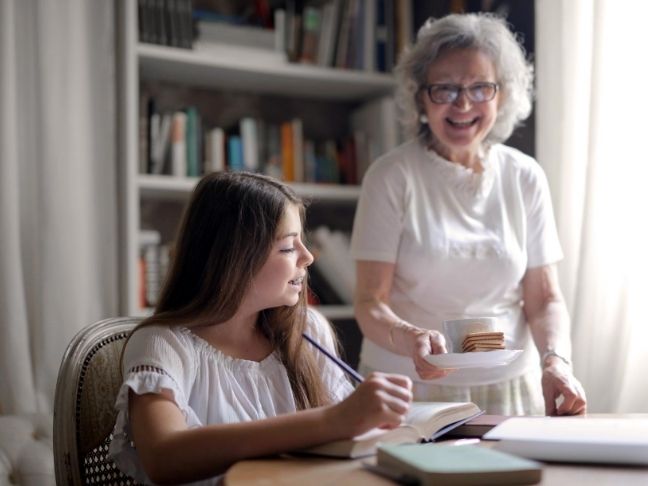 Photo by Andrea Piacquadio from Pexels

There is a bond between grandparents and their grandchildren. A special type of love exists between these two generations and often this is born of and nurtured by spending quality time together. There is no better opportunity for such time than grandparents as babysitters, but this quality time can also put a strain on the elderly.

While the feeling of love is never in doubt, having to look after children during a person’s golden years is hard work. Of course, this arrangement helps overwhelmed working parents save costs on daycare and the like but it’s coming at a different cost—the wellbeing of seniors. It’s a situation forcing some grandparents to consider charging for childcare.

The idea of grandmas and grandpas looking after their grandkids is not a new concept. In fact, seniors have been doing this for generations. The demand for such an arrangement today is like never before. With childcare costs soaring, more and more parents are being asked to help raise their children’s families.

While babysitting kids, particularly by relatives, is often a labor of love, more and more older people are looking for compensation for their time and energy. This is understandable given that minding children is no small feat.

Grandmas and grandpas, in some cases, are happy to devote their retirement years to their new generation of family members. In fact, some have even gone as far as to move closer to their children and their family. This is because many believe babysitting is their new purpose, but even for those who volunteer, there is much to consider.

Looking after a youngster (or youngsters!) involves more than just preparing morning tea and lunch for school. The caretaker must see the child to school and wait at the gate to pick them up in the afternoon – often karting their scooters or tricycles. It might also include ferrying the youngster from after-school music lessons or sports training some distance from the home.

With workers being expected to put in more hours at the (home) office, the adult looking after the children is often expected to cook dinner as well. Long hours and endless responsibilities add to an emotionally and physically draining day, even more so for a retiree.

The real cost to grandparents

There is another factor to consider. Some grandmothers and grandfathers feel like they must give up their retirement dreams in order to be readily available to help their children raise their offspring.

Some grandparents feel childcare pay would cushion the blow. New research suggests two in five people surveyed believed they should be paid for taking care of their grandkids. This isn’t such a far fetched request considering 16 hours of a seniors’ week, on average, are spent caring for their grandkids.

These 16 hours come at a great cost to the lives of the individual. This can be seen in the figures that indicate that 58 percent of surveyed grandmothers and grandfathers forgo recreational activities in order to babysit. 42 percent sacrifice travel and the idea of a holiday. While 30 percent of the people surveyed even changed their work arrangements in order to provide care.

While more than 37 percent of the grandmas and grandpas surveyed believe they should be paid for taking care of their grandchild, it’s uncomfortable to ask for money. Especially when for many, providing this type of care is expected and deemed a normal part of how families operate.

Though a portion of the older generation feel like they should be paid, they won’t ask. Simply because most seniors remember when their own parents were able to babysit without asking for or even expecting monetary compensation.

Grandparents and their grandkids

Grandmas and grandpas love their grandchildren. When it comes to minding them, love is never in question. Instead, the question is, should there be some sort of monetary payment for this type of arrangement? This is a valid question seeing that seniors are saving their own children and the country a substantial amount in childcare costs.

There are some countries in the world that provide payments to seniors who look after their children’s kids. However, there are other countries that find a monetary payment to be unnecessary. At the end of the day though, there is no blanket decision that can solve this issue. Making everyone happy revolves around asking if love is enough payment, or isn’t it?