Do you know the different types of Asian cuisine? 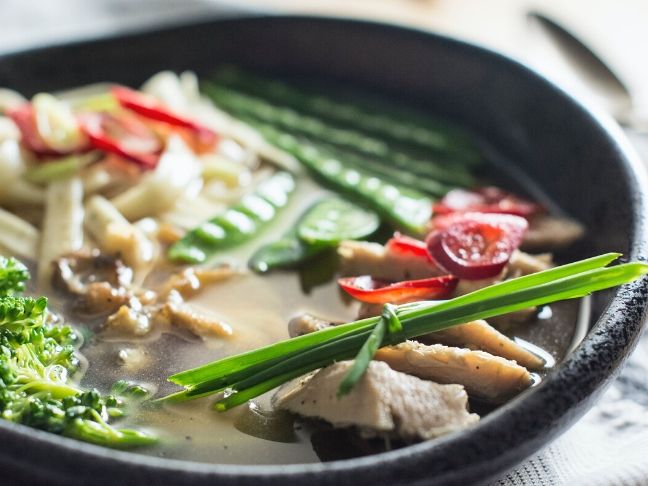 Photo by Stacey Doyle on Unsplash

Western food is certainly delicious, but sometimes we crave to break out of our comfort zone and try something a little more exotic. Asian cuisine is a great choice for anyone who wants to branch out, but bear in mind that simply saying “Asian” doesn’t really say much about the kind of food you want to make.

Asian food consists of Chinese, Thai, Japanese, Korean, Taiwanese, and Vietnamese cuisines, and they are each unique in their own way.

Are you a little tired of making meatloaves and burgers? Then take an exotic adventure through Asia, and try different styles of foods to surprise your friends and family.

When we think Japanese food, most of us associate it with sushi. Sushi is a unique dish made out of raw fish like tuna or salmon, rice, and ingredients like cream cheese, avocado, cucumber, and crab. Beginners are usually a little wary of eating sushi because it incorporates raw fish, but we definitely recommend that they try it. Sushi is light, delicious, and you won’t even know you’re eating raw fish when you take a bite. If you add low-sodium soy sauce to it, it’s generally a fairly healthy meal, too. If you like hot food, then try mixing it with a little wasabi. Wasabi tastes similarly to horse radish, but more potent.

Once you’ve tried sushi, you can move on to other Japanese dishes. We recommend miso soup, which is light and healthy, or Gyoza dumplings that go great with soy sauce. Ramen is also fantastic, and so are Yakitori skewers, Teriyaki beef, tempura dishes, and Onagri rice balls.

Chinese food is downright addictive. It’s divided into several cuisines, with Cantonese, Sichuan, and Shangdong being the most popular ones. One of the most famous foods on the Chinese dishes list are shrimp dumplings, which are part of the Cantonese cuisine. We also recommend that you try the Chinese dim sum, which is a style in which food is made. It consists of bite-sized portions that are usually served along with tea, and are meant to be shared in the company of loved ones.

There’s a dish that’s often attributed to the Japanese culture but is actually Korean – kimchi. Kimchi consists of salted and fermented vegetables and is usually served as a side dish, and it’s very healthy to eat. In addition to kimchi, some other famous Korean dishes are Bibimbap rice bowls, Sundubu Jjigae tofu stew, and Haemul Pajeon, which are thick Korean pancakes with seafood and veggies.

Taiwanese cuisine is a hodgepodge of various influences around the world. It’s known for its salty-sweet flavor and heavy usage of spices such as basil and garlic, and one of its most famous dishes is the beef noodle soup. Which it’s difficult to lay claim on a beef soup with noodles, this is actually Taiwan’s national dish and it’s very easy to make. Besides the soup, try Taiwanese Bao, which is a dish with pork belly buns.

Vietnam food is marked by its simplicity – you can make some of their most famous dishes practically in any kind of kitchen. However, this doesn’t imply this is bad food. Quite the contrary. The simplicity gives it delicious charm, and if you’re a beginner cook, you won’t have any trouble making dishes based on Vietnamese recipes. One of the most popular dishes is Pho, which is a noodle soup with a salty broth with vegies, and meat like chicken or beef. It’s cheap and quick to make. Another great dish is Cha Ca, which is a dish of fried fish seasoned with turmeric, garlic, and ginger.

You probably already know one Thai dish – the famous and delicious Pad Thai. If you’ve never tried it, now’s a great time because it’s filling and easy to make. All you need are rice noodles, chicken bits, ginger, garlic, shrimp, and some seasonal veggies to throw inside.

Other than Pad Thai, yellow, green, and red curry are all traditional Thai dishes, and so is Satay chicken, and shrimp lettuce wraps.

Asian cuisine generally relies on fish and heavy broths more than western cuisine, and it often incorporates rice noodles and spices like ginger and garlic. There is a great variety of tastes that you can choose from, so pick a recipe of something you like and start experimenting with this new style of food.