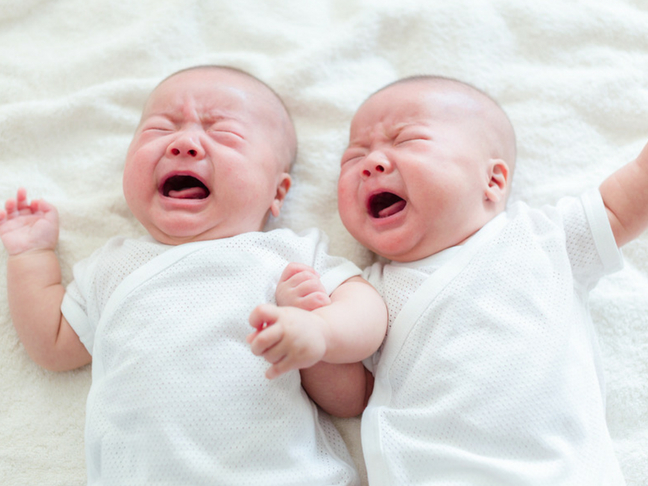 My husband and I both come from large families. My mother was one of five and my father was one of six. Naturally, when they got married and started having children of their own, having a big family was never a question. My parents ended up having seven children of their own, and with that many children all so close in age, naturally you have a few trial and errors during your parental journey. That why, when I started my own journey into motherhood, my mother’s phone number would be on speed dial.

The first two children were easy. They hardly cried and slept through the night from the beginning. They played well together and pretty much painted the picture for an ideal family. We decided we would add another one soon after our second turned one. You can imagine that we were surprised when we found out the one wound up being two, and that everything we had planned for ourselves had now gone out the window. Naturally, two is harder than one. Sleep schedules become imperative if you ever want to catch some “Zzz” for yourself again, and getting through certain milestones meant finding something that worked for both of them.

That’s why when our twins reached the teething stage, notorious for sleepless nights and cranky babies, we needed something that was a tried and true fix. We would need the holy grail of remedies. After several hours of internet searches and many nights spent clenching to the thought of one day being able to sleep soundly again, I decided to call my own mother and if nothing else, release some steam and vent about how my life had become out of control. After listening to me, my mom suggested a few items that she used with me and my siblings. After trying everything on her list, I’ve compiled a list of my own teething remedies that combine my own modern day methods with my mother’s tried and true remedies.

My mother had suggested amber teething necklaces from BalticWonder.com, which she said we all had worn for the first two years of our lives. I was now curious. I was the oldest out of seven children and I don’t remember any of them teething. Baltic amber necklaces get their name from the region that they come from. Countries surrounding the Baltic sea have used amber for centuries to heal a multitude of problems, such as everyday headaches, muscle and joint aches, to seasonal depression. This is due to the succinic acid that’s found in the oils that make up the amber. Succinic acid is notorious for being nature’s Ibuprofen due to it’s anti-inflammatory properties, while also being packed full of antioxidant rich oils that promote a healthy immune system while also helping aide in depression. 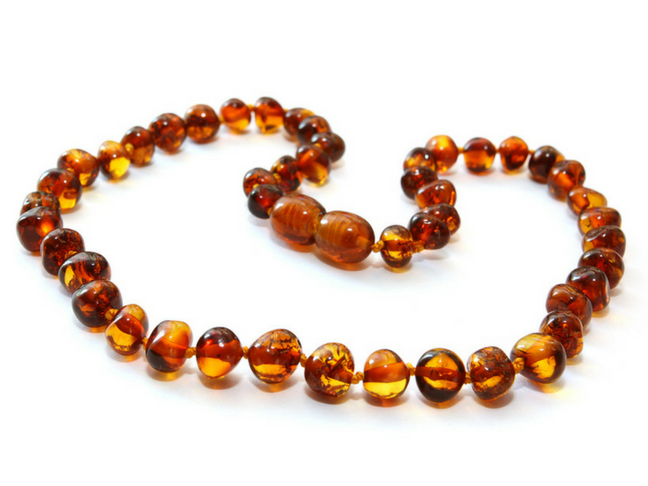 Something that I had tried when my two older children were going through their teething phase was frozen fruit. This is a remedy that can work wonders if you have a child who is at least six months old, enjoys eating fruit, and doesn’t mind getting a little messy! If you go to your local grocery store or browse an online store like Amazon, you can find mesh teether toys that are made to be filled with frozen fruit for your baby to chew on without the worries of them choking. My two older children loved this method. It provided an “ice pack” for their swollen gums while tasting delicious and soothing the sensation to chew on things!

Another tried and true remedy that I found worked for my two older children, and was suggested by a dear friend of mine, were the little teething giraffe toys. If you search amazon, you’ll find a toy that has been voted the #1 most beloved teether for over 55 years, while also being made up of 100% natural products, which means no worries about harsh chemicals! The giraffe’s legs, arms, head and tail are made up of super soft rubber that is perfecting for your chewing infant! This toy was a beloved toy of our household and saw plenty of teething infant’s through this dreaded phase!

Each one of these methods comes from a mom that’s been there, done that, and has found something that worked for them and their babies. Tried, true and natural, each of these remedies is sure to soothe your baby and restore you and your household’s peace and sanity.

Jenn Sanders currently works as a marketing assistant at Baltic Wonder, a company that is dedicated to the health and well-being of infants. Outside of work, she enjoys spending time with her family and outdoor adventures.