Now and again I have even less free time than usually, and that’s when I need some hyperspeed recipes. One of my favorite is the hyperspeed chocolate rolls. 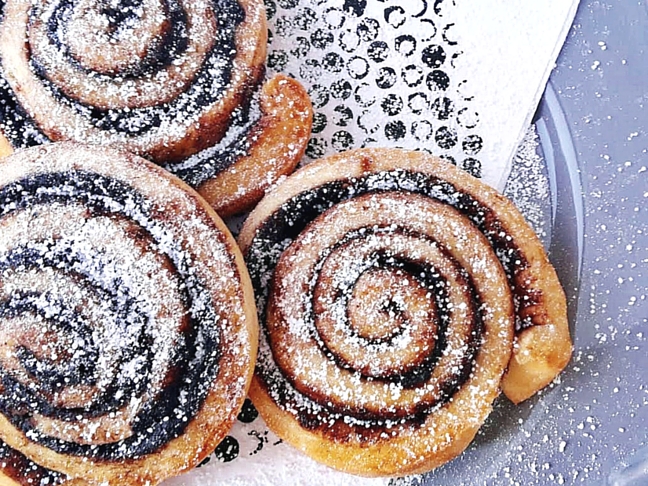 As a mother of five I soon learned not to waste too much time making a meal, be it a main dish or a dessert, but according to my children I’m still not fast enough.

Obviously the meat has to cook/roast as well as the dough for a dessert has to be leavened, and all of this takes longer than five minutes. That’s the part they don’t seem to get. How can these two completely opposing standpoints be reconciled? Well, the simplest solution is for me to switch to  hyperspeed and omit one of the phases, such as the long leavening during making a dessert. Naturally, this method doesn’t always work with just any kind of pastry but it does with the classic one, the snail with different fillings, which makes my children very happy.

Of course they like the traditional leavened variety as well – the shape of which I sometimes reimagine – but when the pastry basket is empty, this simply ceases to be an option because they let me now (also in hyperspeed!) that they will starve if they don’t receive some snacks immediately.

To avoid mass extinction on the fifth floor, I quickly dived into the family recipe collection, where everyone puts any recipes they have ever tried (or even meant to try) and found the perfect foundation which contained everything I needed and only missed the time-consuming leavening.

I only modified the filling a bit, killing two birds with one stone. Seeing and tasting the results, I don’t think anyone could have guessed that making a basketful of these delicacies took only half an hour including baking.

Leave a Reply to Adrienne A. Brown Cancel reply